My Success Story with W Abrasives 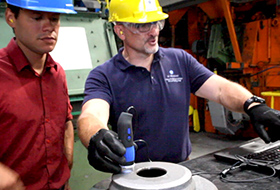 My Services and Solutions with WA Trial in our Test Center with no limits. Seize the opportunity and reap the benefits! Over and again customers have declined our offer to conduct trials, despite it being one of the fundamental steps in the Premium ‘7 Steps’ method. Over and... #Customer #Solution #TestCenter #Trial 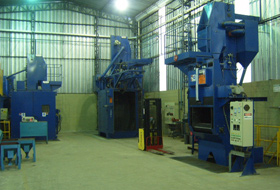 Hutchinson Paulstra is a French company specialized in the design and production of rubber-based anti-vibration and acoustic solutions. Its products are mainly aimed at the automobile and aerospace industries. The Hutchinson Group is a subsidiary of the Total Group.

It was also a specific request that Hutchinson Paulstra currently requires; reducing the cycle lengths for shot blasting operations without modifying the cleanliness or roughness of its parts.

Currently the client uses a shot with a 300 second cycle. It was during the first trials conducted in May that Hutchinson Paulstra chose to rely on Winoa.

First, the trials were conducted using the client's abrasive solution, with the same parameters as those implemented on its facilities (projection speed and rate). This operation allowed a reference point to be found in terms of the cleanliness and roughness of parts to subsequently be able to propose an alternative solution.

For the purpose of its objectives, W Abrasives experts recommended a product from the Stelux C range, a stainless steel shot designed for cleaning, deburring and the preparation of non-ferrous metallic parts.
It was therefore decided to use Stelux C20 and C30 by varying the time and project speed parameters.

For Stelux C20, which is finer, the cleanliness results were very satisfactory, on the contrary the roughness was slightly lower.

Thus the shot projection speed, shot consumption and machine wear can be reduced. Finally the cycle time could be reduced to 200 seconds.

The client supplemented these results by tests undertaken on its site. Satisfied by the first results provided by W Abrasives products, Hutchinson Paulstra this time submitted them to Cheylas in September to validate the tests carried out and to eliminate the “machine factor”.

During this second round, the machine was loaded with an abrasive solution sampled from the client line. Following a reference made with an existing part, our teams were assured that the results obtained in the trials were coherent with those that the client obtained on its site.

These time cycle reduction trials were done again, this time with a lower projection speed: 66 ms and 200 seconds of shot. The results are again similar to those obtained under the same conditions as the client.
In conclusion, this shows that reducing the time cycle by 30% without changing the surface is perfectly feasible. Combined with a reduction in projection speed, the expected benefit is a reduction in machine wear and approximately a 10% reduction in consumption.

The W Abrasives prove once again that there are several parameters that play a significant role during shot blasting operations and a cost reduction is not only made by reducing the shot price, but by a controlled process which does not alter any aspects of quality.

Find more information on our “Total Cost Operations” approach on our TCO video: